This article was published in the Review & Herald magazine on October 31, 1918. Dr. W. A. Ruble was the Secretary for the General Conference Medical Department. October was the deadliest month of the entire pandemic in the United States, and the points he makes in this article had a profound effect on me when I read it. Be inspired. Be challenged. 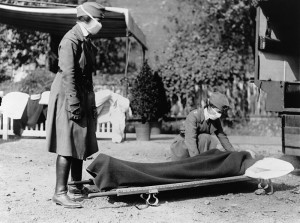 AFTER INFLUENZA, WHAT?
Our country at this time is passing through one of the most widespread and devastating pandemics that it has ever experienced. Gruesome accounts are given on every hand of cemeteries strewn with occupied coffins awaiting diggers to inter them; undertakers with dozens of bodies awaiting caskets; morgues taxed to their capacity, and additional buildings and even tents requisitioned for the overflow.

Among the living many are dying unattended by physician or nurse. The scarcity of doctors and nurses occasioned by the war has made adequate help to the suffering impossible. Every practical nurse and every other person that could at all minister to the sick has been called into service, and still there is not enough help.

Many cases of the disease even among our own people have been neglected because of lack of some one to minister to them. Our sanitariums are crowded with these cases, and many nurses, doctors, and others have contracted the disease.

What should all this mean to Seventh-day Adventists? Some “holier-than-thou” person who has escaped the disease may look upon this epidemic as a harbinger of the great distress that will come in the last days and may look upon his immunity to the disease as an evidence of his own righteousness, while attributing the misfortune of his brother to his lack of fidelity. Another crank on health reform, seeing his brother laid low and himself escaping, will say, ” I told you so. If you ate as I do, you would escape these plagues.” Are these the lessons to draw from this calamity? It is certainly time for us to live up to all the light we have in every way; but the great lesson, it seems to me, that we should learn from this experience is to get ready for later and worse scourges than this, which will surely come, prophecy being true.

Look at the curtailing of opportunities for carrying the gospel to the world as occasioned by influenza: churches and all public meetings closed, travel by train and steamship restricted, colporteurs refused the privilege of pursuing their work, and even mails interfered with so that it takes a week for a letter to go where it went in a day before.

With this introduction I want to, ask my first question again: After influenza, what? What shall Seventh-day Adventists do to be ready for such experiences? We have known from Bible teachings and from the spirit of prophecy for many years that such times were coming. We have been told over and over again to prepare for these experiences by well-ordered lives and by securing such a preparation for service as would enable all our people to minister to the sick and distressed in such a time. Ministers, colporteurs, teachers, and lay members have been urged to become medical missionaries. We are told that every Seventh-day Adventist home should be a small sanitarium, that every Seventh-day Adventist should be a medical evangelist, that the medical phase of our work would be one of the last to be closed.

During this epidemic every Seventh-day Adventist has had ten times as many opportunities for service as he could fill if he had been ready for them. What a chance for missionary endeavor and for practicing that pure religion and undefiled of which James speaks! Some, however, have been so fearful of contracting the disease that they have refrained from offering assistance to the distressed until the disease actually invaded their own families, while others have exceeded their strength in ministry to the sick. In such experiences as we are passing through, barriers, social and professional, are being broken down. What a sick person or the family of a sick member wants is some one that can and will do something for them. It matters not whether the helper be white or black, Christian or heathen, rich or poor. The doctor and the nurse no longer hold the pre-eminence they have held heretofore. The practical nurse or any one who can do things is in demand.

After influenza, what? Let every Seventh-day Adventist become a medical missionary. Let our sanitariums establish short intensive courses. Let our colleges and schools install equipment and provide courses that every young man and woman shall learn nursing. Let schools of health and first-aid courses be given in every church. In short, let us do what the Lord through his servant for forty years has told us to do, namely, become medical missionary evangelists indeed, and not in theory only.

For more info on this topic:
The Deadliest Pandemic America Has Ever Seen
One 1918 Spanish Flu Treatment That Really Worked